A few words about...

The orchestra Les Musiciens du Prince –Monaco was founded in the spring of 2016 at the Monte Carlo Opera, upon the initiative of Cecilia Bartoli and in collaboration with Jean-Louis Grinda, then Director of the Opera. The project received the immediate support of HSH Prince Albert II and HRH Princess of Hanover. Cecilia Bartoli, performer and artistic director, has brought together the world’s finest musicians, playing on period instruments, to create an orchestra inspired by the 17th and 18th century music traditions in vogue at princely, royal and imperial courts throughout Europe. Her artistic vision is centred on the grand masters of the Baroque period, such as Haendel, and Vivaldi, as well as on the Mozart and Rossini repertoire. Les Musiciens du Prince – Monaco and Cecilia Bartoli have performed in Europe’s major venues, unanimously acclaimed by audiences and the international press. They regularly perform in Salzburg (Whitsun Festival and Summer Festival). Gianluca Capuano has been appointed Principal Conductor in March 2019. Les Musiciens du Prince – Monaco are in residence at the Monte Carlo Opera. 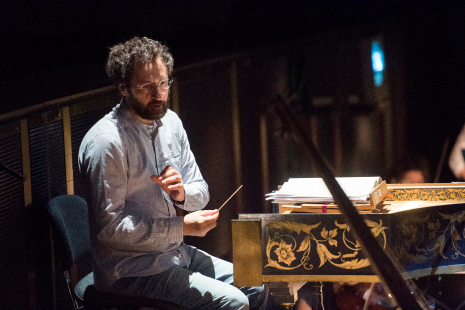 Born in Milan, Gianluca Capuano graduated in organ, composition and conducting from the Milan Conservatory. In 2006 he founded an instrumental and vocal ensemble dedicated to early music, Il Canto di Orfeo. In 2016, he gained international recognition when he conducted Norma with Cecilia Bartoli at the Edinburgh Festival, a performance that was repeated in Paris (Théâtre des Champs-Élysées) and Baden Baden. He then conducted La Cenerentola with Cecilia Bartoli. In 2017 he made his debut at the Salzburg Festival in Ariodante (revived later in Monte Carlo) and La donna del lago, both with Cecilia Bartoli and les Musiciens du Prince – Monaco, of which he has been Principal Conductor since 2019. He is invited by the main European opera houses (Milan, Rome, Cologne, Munich, Vienna…). Recently, he conducted La Cenerentola and Iphigénie en Tauride in Zurich, Orfeo ed Euridice in Rome, L’elisir d’amore in Madrid, Il matrimonio segreto in Amsterdam, Guillaume Tell at the Chorégies d’Orange, Il turco in Italia at the Monte Carlo Opera and the Vienna Staatsoper, Il barbiere di Siviglia at the Whitsun Festival in Salzburg.